New York, NY – CLC Advisors, LLC is proud to be selected as part of the NASA Social to welcome the Space Shuttle Endeavour to NASA Dryden Flight Research Center at Edwards Air Force Base in the western edge of the Mojave Desert. The NASA Social will welcome space shuttle Endeavour to Southern California, where Endeavour is expected to arrive at Dryden on Sept. 19 and depart Sept. 20 for Los Angeles International Airport, where it will remain in a hangar until its transfer in October to a permanent home at the California Science Center.

NASA Social guests will have a rare opportunity to see the landing and departure of Endeavour as it rides piggyback on NASA’s 747 Shuttle Carrier Aircraft. Participants also will speak with experts, tour shuttle support vehicles and other NASA aircraft, and interact with fellow NASA social media followers, space enthusiasts and members of NASA’s social media team.

During the two-day event, NASA Social participants will have the opportunity to:

‎”There were over 2,000 people who registered for the NASA Social to welcome shuttle Endeavour to California and only 40 slots due to bus space and other logistics. The good news is that millions of people across the country will witness the shuttle flying overhead on its journey to to the West Coast.” – John Yembrick, Director of Strategic Communications, NASA. 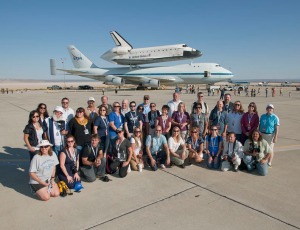 About NASA
NASA’s vision: To reach for new heights and reveal the unknown so that what we do and learn will benefit all humankind.

To do that, thousands of people have been working around the world — and off of it — for 50 years, trying to answer some basic questions. What’s out there in space? How do we get there? What will we find? What can we learn there, or learn just by trying to get there, that will make life better here on Earth?

Since its inception in 1958, NASA has accomplished many great scientific and technological feats in air and space. NASA technology also has been adapted for many nonaerospace uses by the private sector. NASA remains a leading force in scientific research and in stimulating public interest in aerospace exploration, as well as science and technology in general. Perhaps more importantly, our exploration of space has taught us to view Earth, ourselves, and the universe in a new way. While the tremendous technical and scientific accomplishments of NASA demonstrate vividly that humans can achieve previously inconceivable feats, we also are humbled by the realization that Earth is just a tiny “blue marble” in the cosmos. For more information about NASA, visit: http://www.nasa.gov/home/index.html.

About NASA Social
A NASA Social is an informal meeting of people who use social networking sites such as Twitter, Facebook and Google+. Participants at this event will be provided a unique in-person experience at NASA’s Dryden Flight Research Center at Edwards Air Force Base that they are encouraged to share with others through their favorite social networks. For information about NASA Social, visit: http://www.nasa.gov/connect/social/social_endeavour_sept2012.html.

Located at Edwards, California, in the western Mojave Desert, Dryden is uniquely situated to take advantage of the excellent year-round flying weather, remote area, and visibility to test some of the nation’s most exciting air vehicles.

In support of space exploration, we are managing the launch abort systems testing and integration, in partnership with the Johnson Space Center and Lockheed Martin, for the Crew Exploration Vehicle that will replace the Space Shuttle. For information about NASA Dryden, visit: http://www.nasa.gov/dryden.

About CLC Advisors, LLC
CLC Advisors, LLC is a management consulting firm that focuses on marketing, brand and business development strategy to build business ventures and innovation. Whether it is through thorough analysis, streamlining or restructuring for our clients’ needs, we are dedicated to finding solutions for traditional business models or expanding into the growing arenas of philanthropy venture capital and social impact.