This article first appeared on Medium. You can read the full article here: Read more.

This article is part of a series of articles on design thinking and thought leaders that transform into what we at CLC Advisors call “i.e.,” the “idea economy.” Where ideas become and transform into widgets for those who choose to dare mighty things to build something bigger than themselves. We are explorers of the universe.

“A gray rhino is a massive two-ton thing with its horn pointed at you, stomping the ground and getting ready to charge — and, most important, giving you the chance to act. It’s the thing we avoid calling what it is, like the so-called “black” and “white” rhino species that in reality are both gray. Paying attention to the gray rhino — that is, working to head off the things we can see in front of us.” — Michele Wucker, author “The Gray Rhino”

During these uncertain times as the world is changing daily in front us. Our way of living has been deeply impacted as the Coronavirus global pandemic spreads. Public health officials, scientists, futurists, strategists, and critics for years have stated the next global dilemma or crisis would not be weapons, but an outbreak of a health epidemic and infectious disease. On March 11, 2020, The World Health Organization officially declared the rapidly spreading coronavirus outbreak a pandemic, classifying COVID-19 as a disease that has spread over many countries and continents. The outbreak was not an unforeseen problem, but a recurrence. The world witnessed the SARS, MERS, and H1N1 outbreaks almost two decades ago and epidemiologists and security experts had been warning for some time that the US was unprepared. And when the pandemic caused global financial markets to crash, it merely was the catalyst that sent a house of cards tumbling after many warnings.

Author Michele Wucker calls obvious but ignored problems “gray rhinos,” a metaphor for “the massive two-ton thing with its horn pointed at you, stomping the ground and getting ready to charge — and, most important, giving you the chance to act. It’s the thing we avoid calling what it is, like the so-called “black” and “white” rhino species that in reality are both gray. Paying attention to the gray rhino — that is, working to head off the
things we can see in front of us.”

Michele Wucker coined the term gray rhino and introduced it in 2013 at the Annual Meeting of the World Economic Forum in Davos to draw attention to the highly probable risks that don’t get their due. Her third book is the international bestseller, THE GRAY RHINO: How to Recognize and Act on the Obvious Dangers We Ignore. She speaks to high level audiences and has written for and been interviewed by publications around the world and has been recognized as a Young Global Leader of the World Economic Forum, among other honors.

Click here to read the rest of the article on our Medium page.

CLC Advisors, LLC is honored to be invited to the U.S.-China High-Level Consultation on People-to-People Exchange, CPE2016 in Beijing, China this month running concurrently with the U.S.-China Strategic & Economic Dialogue led by U.S. Secretary of State John Kerry and U.S. Undersecretary of State Richard Stengel. CEO Cindy Chin joined members of the Secretary’s Office of Women’s Global Issues (S/GWI) as a delegate of the U.S. Women’s Pillar, presented on women’s entrepreneurship, and a speaker and mentor at the U.S.-China Women’s Leadership Exchange and Dialogue (WE-LEAD) in partnership with Goldman Sachs’ 10,000 Women Initiative. 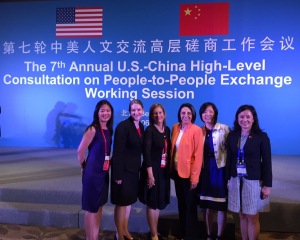 During the Working Session with the All-China Women’s Federation 中华全国妇女联合会she reported on the state of women’s entrepreneurship in the United States and potential impact and the importance of collaborations between the U.S. and China in the private and public sectors:

“The presence of American companies in China will play an important role in empowering women and girls in both entrepreneurship and anti-domestic violence issues in both countries.  Strategically looking for global ecosystems that can support high-impact work by fine tuning strategies across several cross-functional industries and sectors to solidify foundations and stakeholders in a company’s growth as well as GDP.

Venture funds now look for women entrepreneurs and diversity. After studies from the International Monetary Fund (IMF) and McKinsey Global Institute report, we know that advancing gender equality and the advancement of women can increase the annual global GDP by $12 trillion, or 11% by 2025. The public, private, and social sectors need to act together to close the gender gaps. In a full potential scenario where women play an identical role in labor markets to that of men, as much as $28 trillion or 26 percent could be added to global annual GDP by 2025. In China alone, the figure is even greater at 12% increase by 2025 or $2.5 trillion than any other country. Startups with at least one woman co-founder outperform all-male teams. In some VCs, that could mean as much as 62% in better performance and investor returns. 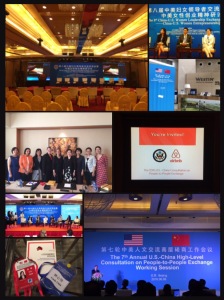 The potential for innovation in China is tremendous. Global entrepreneurs who are starting businesses must have a China strategy if they want to obtain scaleable global growth. Currently, China’s long-term market potential is ripely positioned to have greater impact in global GDP growth than other parts of the world and can learn from the mistakes of the West an innovate with great scale. Such examples include the realm of Fintech and mobile payments, agricultural business innovations, and the potential to leapfrog growth in these areas.

As global business and industry leaders are advocating the support of women, I want to emphasize the importance that as women, we have a wonderful opportunity for continued collaboration, dialogue, and communications that can have higher impact for female entrepreneurs beyond the support of mentorship of businesses and the borders of both countries.” – Cindy Chin, CEO CLC Advisors, LLC 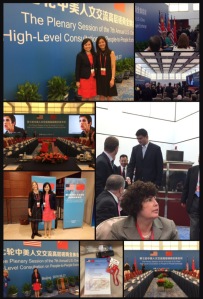